Sometimes, busy weeknights call for a delicious (yet effortless) meal that will instantly transport you to a distant land!  Something that SEEMS way too fancy for a weeknight, but only takes a few minutes to pull together.

When you are short on time, you should always take a shortcut when you can… just make sure you aren’t sacrificing quality for time.  I love lentils and completely appreciate their nutritional qualities; the only problem is that I don’t normally have the time to fool with them on weeknights.  This is when the shortcut comes in.  Something I tried at one of the food shows that we recently went to is a delicious Lentil & Rice Kit that is ready in 20 minutes.  It tastes like it has been cooking all day and the whole family loves it.  Plus, it has lots of protein and it’s Non-GMO.  We are carrying it in the store now.  I toasted the spices according to the package directions, got it going in a pot on the stove, covered it, and let it simmer for 20 minutes while I tackled the tuna.  It doesn’t get any easier than this!

I gathered the ingredients I wanted for the tuna:  sesame oil, sesame seed seasoning, soy sauce, and wasabi sesame seeds. 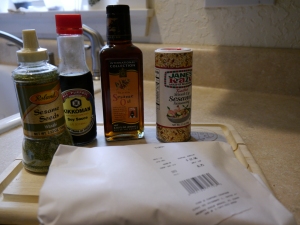 I had visions of curling up on the couch with a bowl and a fork, so I decided I would cut the tuna into chunks rather than sear the entire steak. I trimmed off the bloodline and cut the steak into 1″ squares.

About the tuna…  some people might think Bluefin is ‘the one and only’ tuna.  Bluefin is actually in danger of being overfished.  At Cod & Capers Seafood, we have “sushi grade” tuna (we call it #1 tuna in the seafood industry), but it’s Yellowfin.  It’s every bit as delicious, but it is just so much more environmentally friendly and affordable.  Some people also worry about mercury when consuming tuna.  Unless you eat tuna every day, you really don’t have anything to be concerned about.  All things in moderation!  Pregnant and nursing women are the ones who should really watch their tuna and swordfish intake and stick to consuming small quantities less frequently. 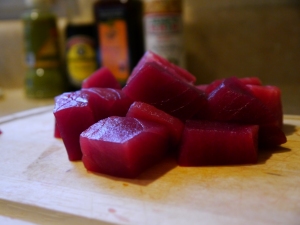 I tossed the tuna with sesame oil, soy sauce, and some sesame seed seasoning that I like.  I let it rest for a few minutes while I gathered a pan and started heating it.

Over high heat, add the tuna to the pan.  The oil it is marinating in is enough to keep it from sticking.  You want the pan screaming hot because you are going to sear and brown the outside and leave the inside undercooked.  This is completely a personal preference.  My son likes it cold in the middle.  I prefer it more along the lines of “medium”.  You might like it cooked all the way.  Keep a very close eye on this and keep it moving in the pan.  I cooked my tuna to medium and it took mere SECONDS!  As soon as you get it to the desired temperature, remove it from the heat.

I went ahead and put some of the coconut lentils and rice in a bowl and topped it with tuna.  I didn’t think it NEEDED a sauce, but there is a particular Asian-inspired sauce I sort of fell in love with and I pretty much will find any excuse I can to use it.  If you ever have the chance to visit a Trader Joe’s, get this sauce.  It doesn’t disappoint.  I drizzled a little over the top of the tuna and sprinkled some Wasabi sesame seeds on it.  The sesame seeds have a great heat, but it doesn’t distract you from the meal itself. 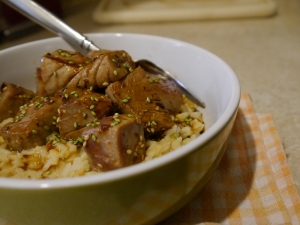 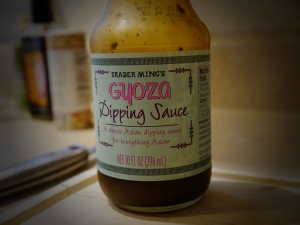 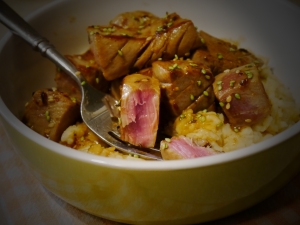 It only took twenty minutes and most of that was just me waiting for the lentils and rice to cook.  The actual tuna took maybe 5 minutes from start to finish.  SO easy and what a treat!