I will start this off by saying that this is not entirely my original idea.  Here’s the story: I once fell completely in love with a wonderful local restaurant that specialized in Bahamian fare.  Sadly, this restaurant closed only a short time after it opened.  This is a common occurrence in South Florida.  It’s tough out there!

A conversation at the office on Saturday had me thinking about some of the dishes I used to enjoy there.  One of my favorites was a Grouper Cheek appetizer.  It had bacon and a raspberry sauce.  Amazing.  I started wondering why I had never attempted to recreate this one at home, as I have done with several other things I find myself longing for.  I quickly decided to take the plunge and we were NOT disappointed.  Not one bit.

What is a Grouper Cheek?  It comes from a Grouper.  It actually comes from the area right between the mouth and the gill… the cheek, if fish really had “cheeks”.  It’s a tender little medallion of deliciousness.  Because this is considered a “byproduct” of processing fish, the price is great despite the excellent quality.  For example, the Grouper Cheeks at Cod & Capers are cut from the same fish that the gorgeous fillets are cut from.  The Grouper Cheeks are $7.95/lb and the fillet is $23.95/lb.  You can see the value here, right?  It’s not for everyone but it’s worth a try.  At the shop, we have a limited number of these available for purchase each day.  By the time I had this grand idea, they were nearly sold out.  I settled for a piece of Grouper fillet instead.  No big deal.  It’s interchangeable in most recipes.

This is what Grouper Cheeks look like, in case you are curious. 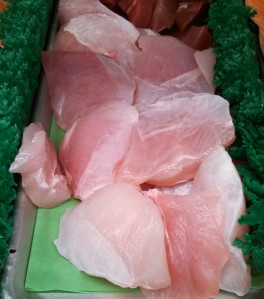 What You Will Need:

I started with a pound of Grouper fillet.  I cut it into four equal pieces and got ready to wrap it in bacon. 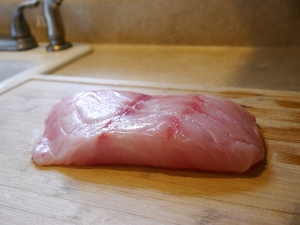 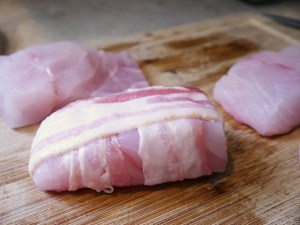 Something I have learned when dealing with bacon:  in order to achieve the crispy texture without overcooking whatever is inside the bacon, skip the thick cut variety and go for the thinnest bacon you can buy.  I wrapped mine in two different directions and made sure that the bacon overlapped on the underside (it sticks to itself quite well) and that all the seams were hidden. 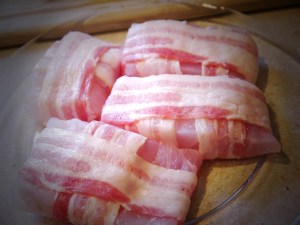 This seemed like an appropriate time to season the fish.  Since I knew I wanted a little heat in the sauce, I wanted to have a little on the fish as well.  I knew I had to be careful about salt with all that bacon, so I decided to very lightly season it with my favorite blackening seasoning.  I put them back in the fridge while I tackled the sauce. 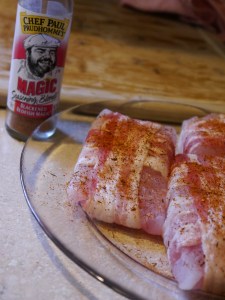 I was a little unsure of where to start with the sauce.  I knew I liked the one I had before, but thought a little heat might be a nice addition.  I started with one small container of raspberries and 2 tablespoons of Red Wine Vinegar.  I put them in a small pan over medium heat until the berries were soft.  I smashed them against the side of the pan with a spatula until they were fairly smooth. 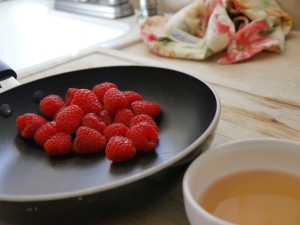 It was extremely sour.  I added a tablespoon of sugar, 1/4 cup of unsweetened natural coconut, and a teaspoon of chipotle powder.  The smokiness of the chipotle will compliment the bacon nicely and still give the sauce subtle heat.  After everything was combined and allowed to simmer for a few minutes, I removed it from the heat and set it aside.  I tasted it and was satisfied with it.  If you find it too tart, you could add more sugar.  My raspberries were fairly sweet.  It was hard to imagine what it would taste like on the fish, but there was only one way to find out.  (You could strain it at this point, if you have an issue with seeds.  I like the rustic look and seeds don’t bother me one bit, so I left mine as is.) 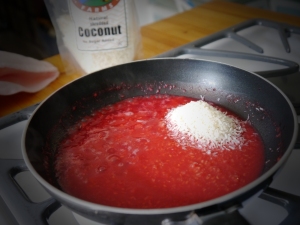 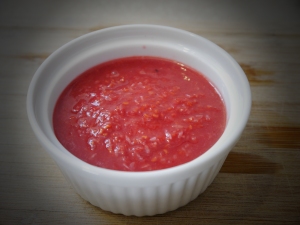 Back to the fish.  I got out the biggest skillet I have (you need LOTS of room around the pieces of fish or they will just steam and your bacon will never get crispy).  I heated it over medium-high heat and did not use any oil or cooking spray since, after all, we are dealing with bacon here.  I put each piece of fish into the skillet with the bacon seams facing down.  You want to seal those seams right away.  I let them cook for about three minutes on this side and then carefully flipped them over and repeated the process. 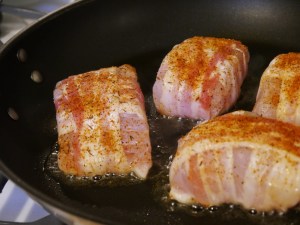 A quick touch test told me that the fish was still slightly undercooked in the center.  I transferred them to an oven-safe plate and allowed them to cook for a few more minutes in a 350-degree oven.  Here is what it looked like after it was finished cooking. 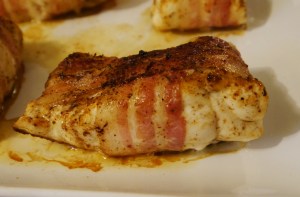 I was really getting excited now.  The house was smelling great and I could nearly taste it.  I plated the fish and drizzled some of the sauce over the top.  The result was just as I had imagined it.  It was smoky, sweet, and spicy all at once.  This one is a keeper! 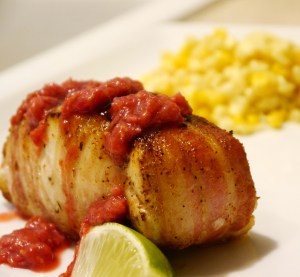 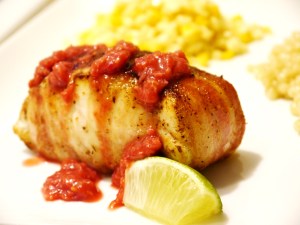