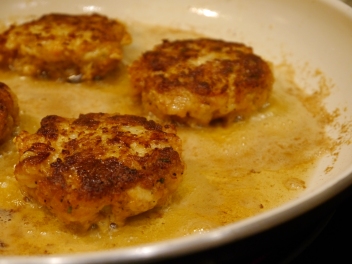 We had Rock Shrimp on special in the Market last week.  It prompted a conversation with a friend in which Shrimp Cakes were mentioned; I realized it had been quite some time since we have made Shrimp Cakes.  Shrimp are already so versatile and this is just one more way they can be prepared!

I used Rock Shrimp for this since they were already peeled and deveined (and they’re small, so you’ll do less chopping).  Some people may opt to put the shrimp in the food processor; I really like seeing big pieces of shrimp, so I just chopped them with a knife.

Start by making sure there are no stray bits of shell in the shrimp and roughly chopping them.  Put them in a large mixing bowl. 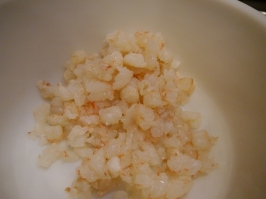 Measure the remaining ingredients and add to the shrimp.  I used Smoked Paprika in the recipe because it added a nice smoky flavor to the Shrimp Cake.  You could use Paprika, Smoked Paprika, or even a Spicy Paprika if you wanted to.  You could also substitute Blackening Seasoning or Old Bay, but you might want to reduce or eliminate the salt because some of those seasonings have a lot of salt hiding in them!  (We have been keeping chickens for nearly ten years now, but I still get excited every single time I crack open an egg and see that deep golden yolk!  Nothing beats a fresh egg!)

Mix until combined and make sure that everything is evenly distributed.

Form handfuls of the mixture into cakes.  You need to firmly compress the cakes so they hold together.  The eggs and breadcrumbs sort of act like glue to hold everything together, but they will be fragile until you introduce heat.  I made ours into six smaller sized cakes.  You want them to be thin enough that they will cook through fairly quickly, but not so thin that they will fall apart.  Heat the Olive Oil (or oil of your choice) over medium heat and then carefully add the cakes to the pan.  I cooked them for about 5 minutes on each side over medium heat.  When you see the shrimp at the bottom turning opaque and the egg is holding them together, it is safe to carefully flip them with a spatula.  It’s very important NOT to disturb them until it’s time to flip them.  Until the egg starts to cook, they will be fragile; once the heat starts to cook the egg, they’re fairly sturdy. 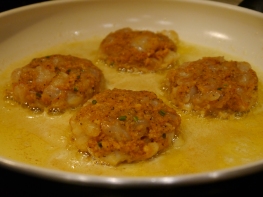 When I flipped them, they were perfectly browned and crispy!  We decided to top them with some homegrown tomatoes from the garden and more chives. 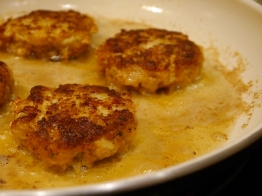 You could use ANY sauce with these… Tartar Sauce, Remoulade, Aioli, etc.  We all love the Mustard Sauce from the store.  We used the Mustard Sauce because it saved me some time, but a spicy mayo (Sriracha and Mayonnaise mixed together) would have been great with the smokiness from the Paprika, too! 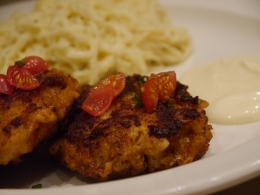 This could be EASILY converted into a gluten-free recipe with the substitution of a gluten-free breadcrumb.  You can also adjust the seasonings.  This is a very quick and easy dinner that the entire family will enjoy!